Hero Forge® is a rich character creator with a multitude of options and features to make your character as you envision it. With so many details, there may be a few that you missed.

Ctrl + Z: Undo the last change you made

Ctrl + left mouse click: Fill -- replace a paint wherever it appears on the menu

Alt + mouse hover over a paint in Color → Mix menu: Highlight where a paint is used

> and < keys: Toggles between the Main and Extra characters when working with multiple characters on one base. 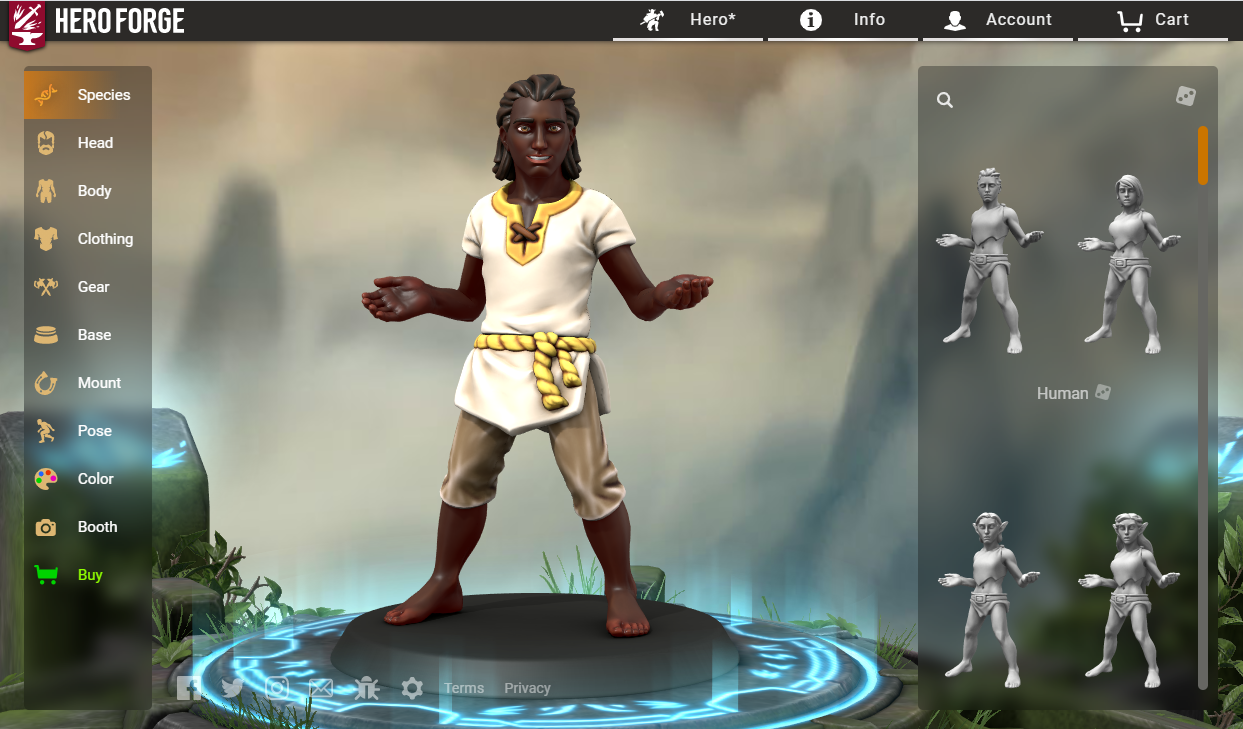 Users with wide screens may wish to group both parts of the menu together. This can be done in the Info → Options menu by checking the “Group Menus Right” box. 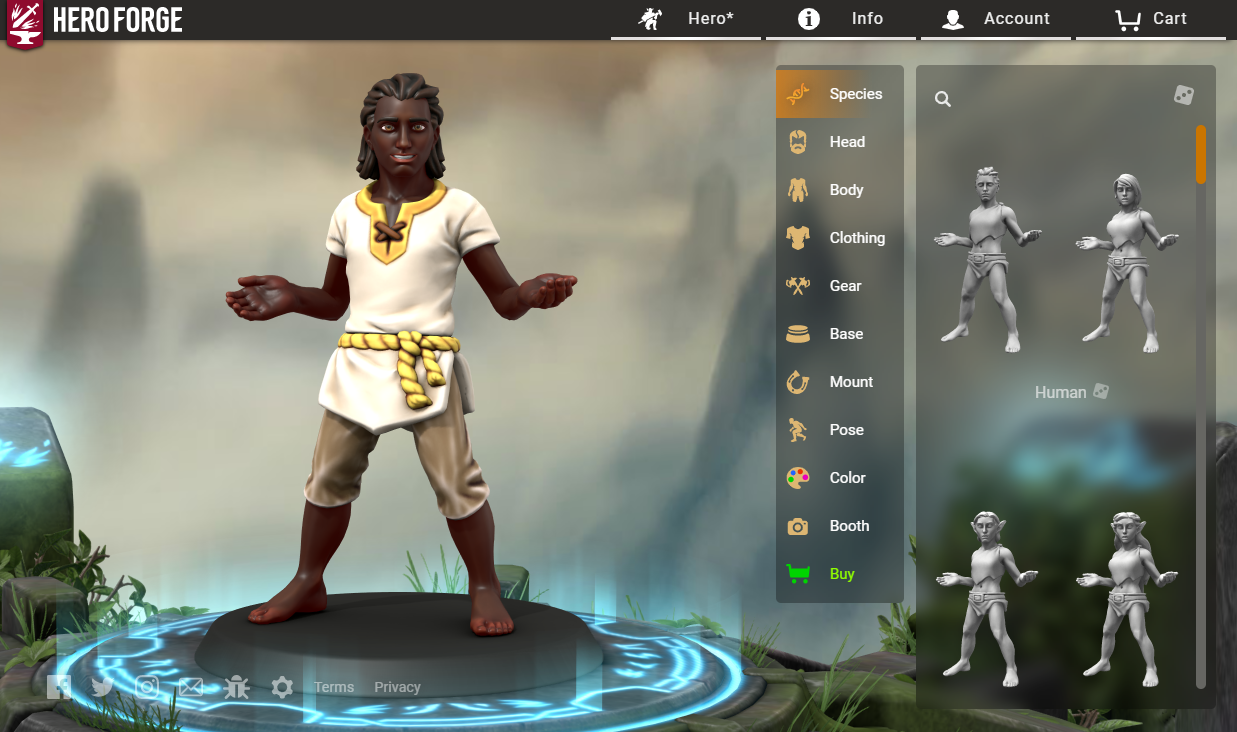 1. You can re-select the blue-highlighted item. An item is highlighted in blue if it is selected. 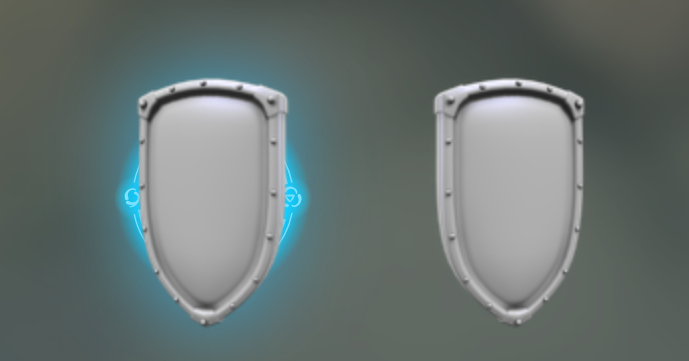 Some left and right item options, such as ears, shoulder clothing, and gloves, are linked together, so that the selection of an item on the right or left will equip that item to both the right and left sides.

To unlink these items or re-link them, select the chain icon at the top of the selection area.

Some menus have dice icons at the top of the selection areas. Click on this icon to get a random option. 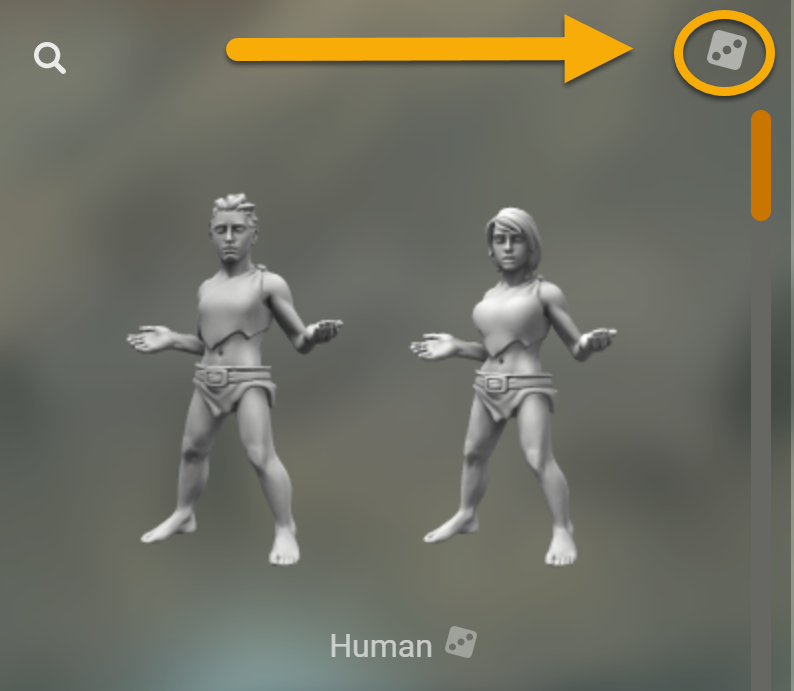 You can search for a specific part by opening up a submenu (e.g. Gear > Hands) and then clicking on the magnifying glass search icon.

Two save options are available in the Hero menu: Save and Save As.

If you want to get an idea of the real-life height of your character, select the Settings icon next to the Height slider in the Body → Measurements menu. This will reveal a measurement tool background that will show you how tall your mini will actually be, as well as how tall the mini would be if the character was standing straight. 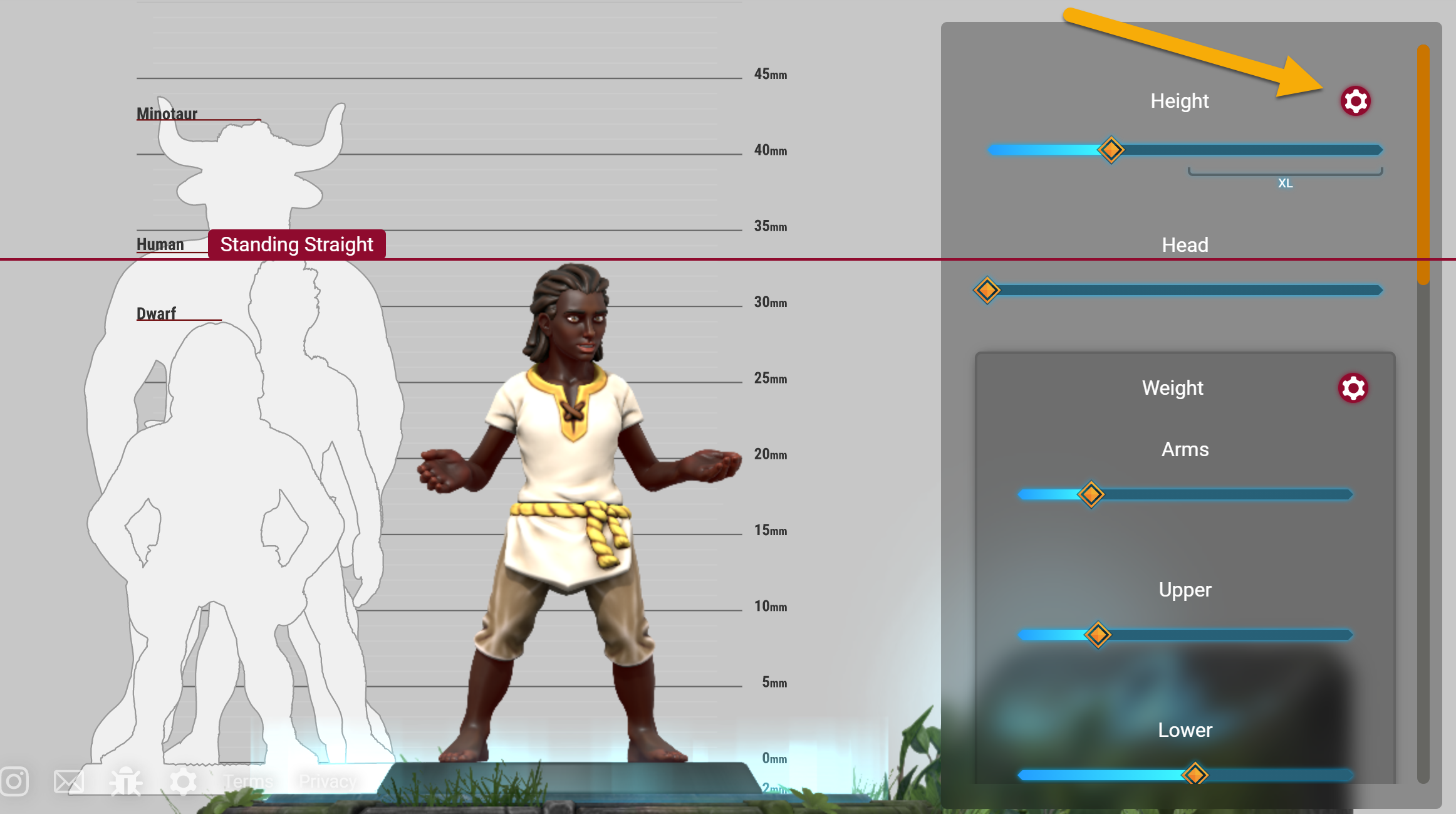 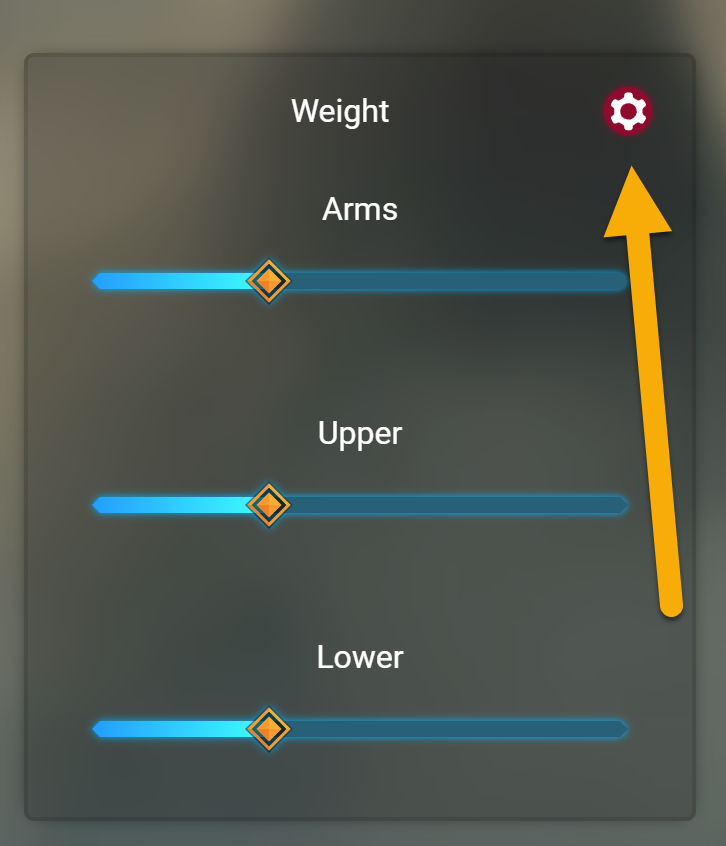 To have your character hold one item in both hands, select the two-hands icon between the left and right item of your choice in the Gear → Hands menu. Not all items can be held in both hands. Note that two-handed poses are unavailable when more than two arms are equipped. 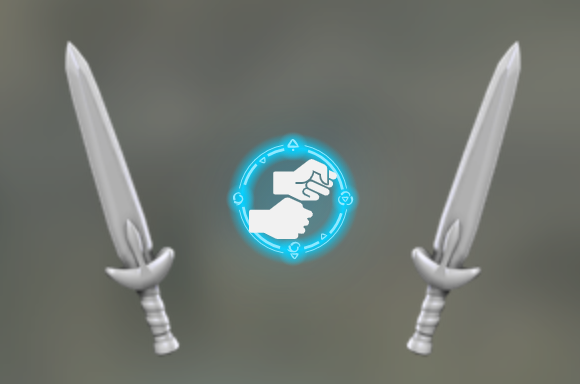 To mirror your character’s pose, navigate to the Pose → Body menu and click the mirror icon on the top right of the pose options. 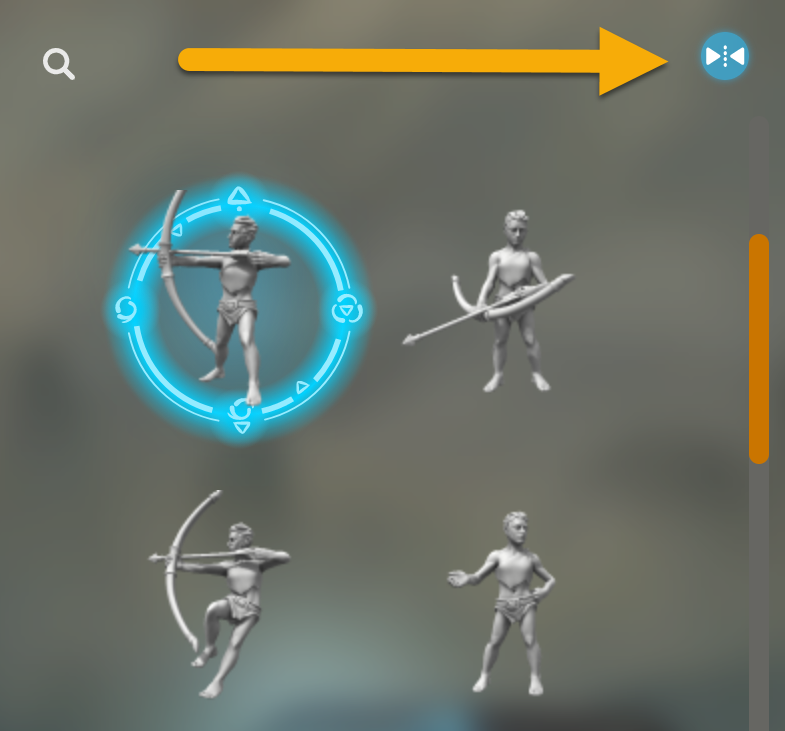 The underside of the base will be colored the same as the rest of the base. If you have equipped a base label in the Base → Label menu, however, you’ll be able to choose a color for the label.

To do so, go to the Color → Theme menu, then select the Settings icon on the top right of the selection area. This will bring up color options for different theme sections, including Underside Label. 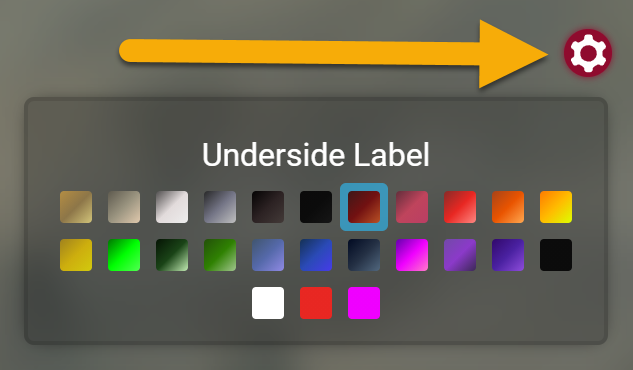 You can view the underside of your base by returning to the Base → Label menu.

When the Paints or Mix submenus are selected, three paint tools are available. 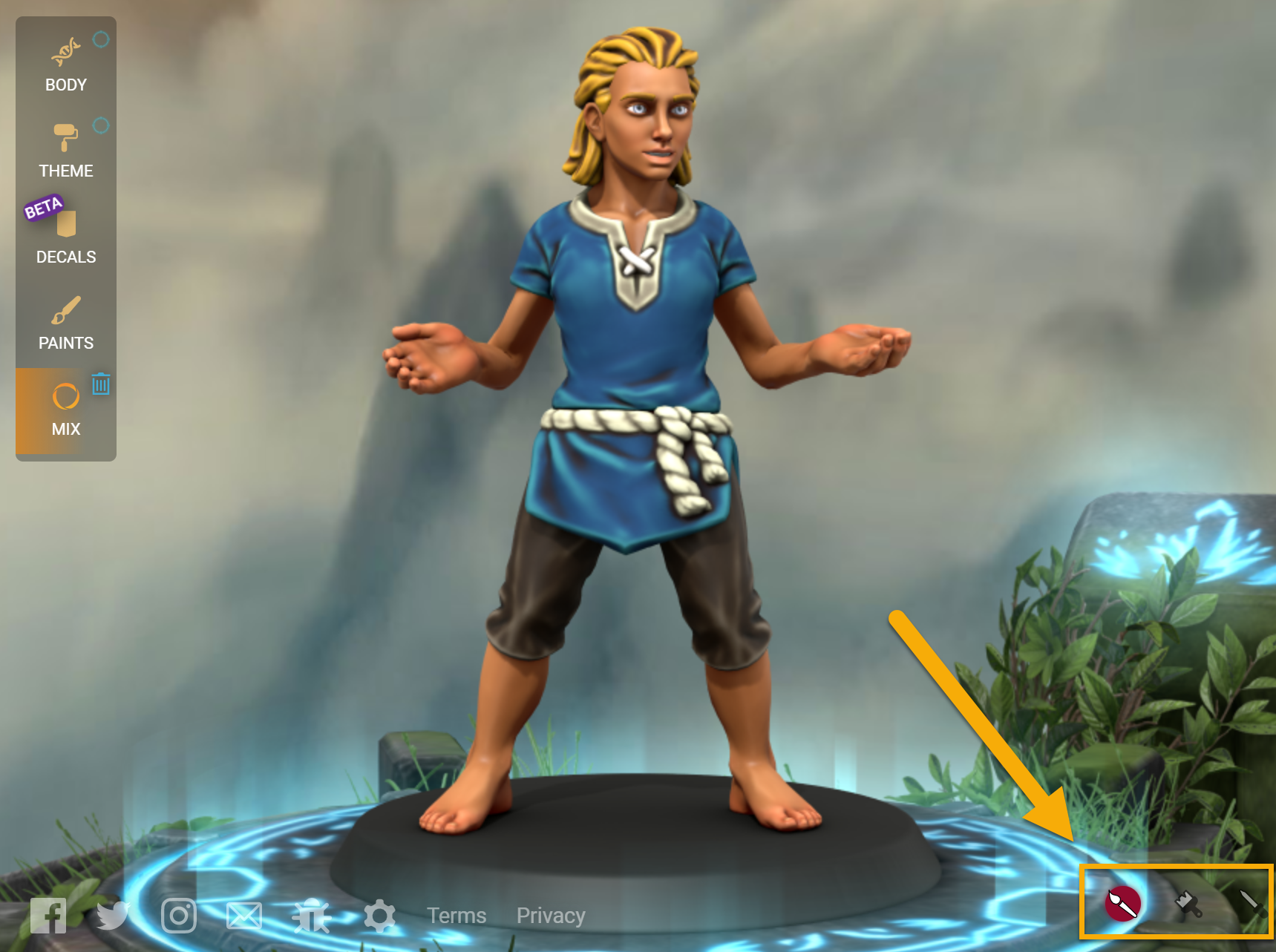 The Paint tool will paint the single area of the mini over which your mouse is hovering.

The Fill tool will paint the mouse-over area, as well as any other areas that share the same type. For example, if you’re hovering over a Cloth-type area, all Cloth-type areas will be colored.

The Pick tool will show you the existing color of the mouse-over area.

There are keyboard shortcuts for the Fill and Pick tool (see Hotkeys).

High colors appear most vividly on edges and extremities, similar to how the traditional painting technique of dry brushing applies colors to the raised areas of a surface.

Mid color selections typically make up the primary color impression of a surface, appearing mostly on the larger, flatter areas of a model.

Low colors appear most commonly in the crevices and concavities of a model, similar to how the traditional painting technique of ink washes settle into the cracks and canyons of a surface.

This slider affects how matte or glossy a surface looks. This value has a strong effect on your 3D printed color's appearance, especially relating to the sharpness of gradients between your "low," "mid," and "high" color choices.

Tip: For 3D printing light-colored metal colors like silver or steel, we recommend setting roughness somewhat higher than the minimum value. Higher roughness values will avoid extreme light and dark banding effects on your print, which some may find undesirable.

This slider affects how dim or bright a surface appears at glancing angles, simulating how light can catch fuzzy edges and produce a "halo" effect. This has little to no effect on a color's appearance in print, but adds realism to the on-screen rendering of certain cloth-like, fuzzy materials.

This slider simulates how light passes through some surfaces. The opacity value has a visible effect on a color's appearance in print, with low opacity colors appearing darker and with lower contrast. This slider primarily adds realism to the on-screen rendering of certain glass or gem-like materials.

Note that it does not affect the actual opacity or transparency of the 3D color print.

This slider simulates how light-emitting surfaces do not have pronounced shadows in their cracks and crevices. The glow slider has a minor effect on large surfaces of 3D color prints, and negligible effect on smaller surfaces. This slider adds realism to the on-screen rendering of light-emitting objects. Note that the Glow slider is visible only on Max graphics settings.

The Transparent Plastic checkmark makes the specified color transparent. Unlike the Opacity slider, this transparency will show up in print, but not in 3D Tabletop Download minis.

The effect is subtle, like frosted glass, and becomes more perceptible when held up to light. Transparent plastic works best when applied to both sides of large areas. When applied to only one side of an object (not recommended), you will typically be able to see through into the internal white core of the miniature.

Not seeing the Transparent Plastic checkbox? Our transparency option requires certain graphics engine features that may not be supported by your device. At this time, we rely on the ability to render this option as a prerequisite for applying and printing transparent features.

The metal checkmark makes a surface look metallic. It is a check mark because most surfaces in the real world are either metal or not metal, but advanced options allow for more granular control for surfaces that are a blend, like mud covered steel. The metal value has a moderate effect on the appearance of 3D color prints, producing more vivid, contrasting gradients.

Hero Forge® allows for the selection of two (default), four, or six arms. To select more than two arms, navigate to the Body → Torso menu. On the bottom of the selection area, there are icons for four and six arms. Select one of them to equip the respective number of arms. 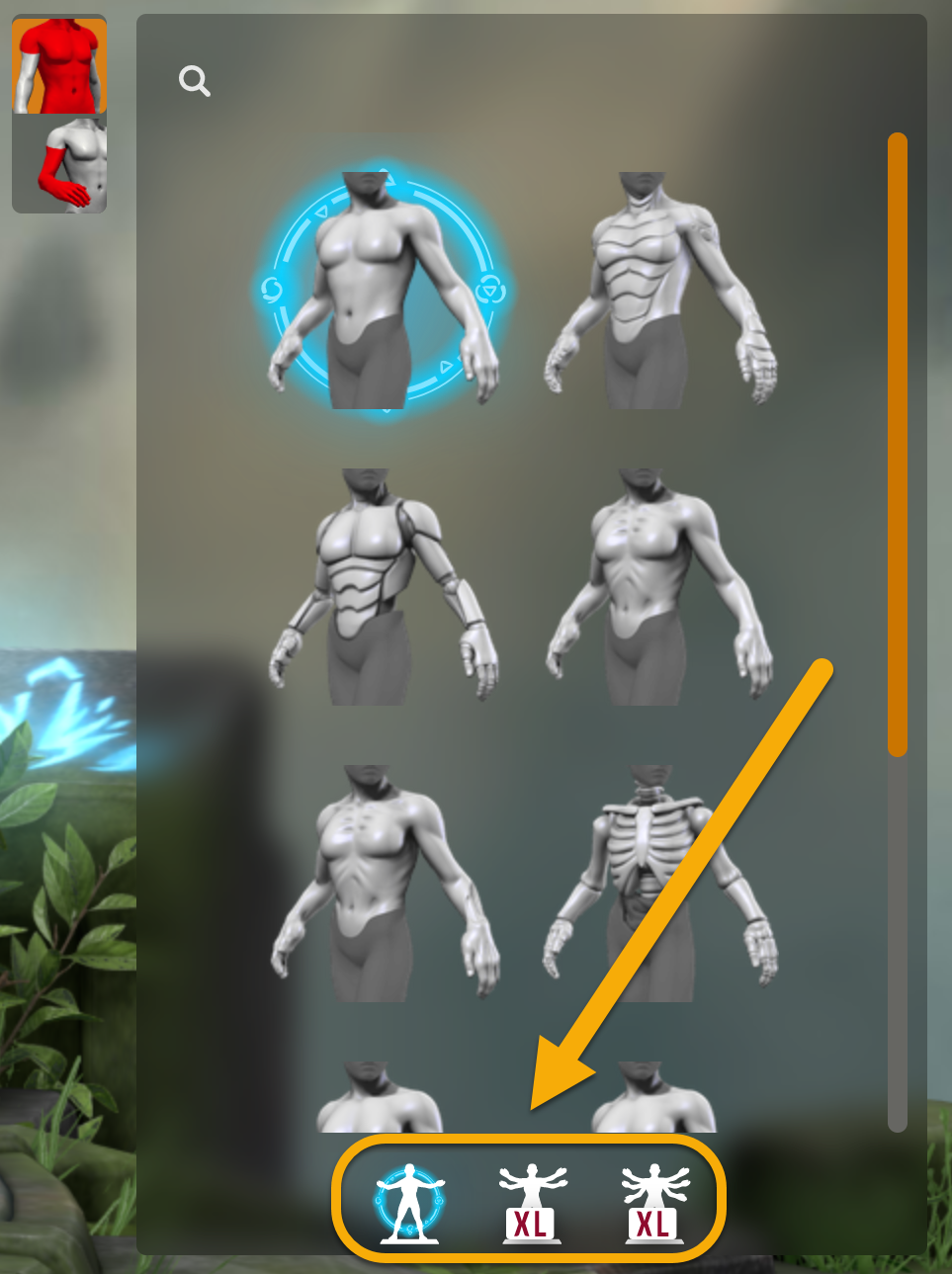 To select arm options, such as prosthetics, amputations, and alternate styles, navigate to the Body → Torso menu. On the left of the selection area, there will be icons highlighting the equipped arms. Select one of them to choose prosthetics and amputations for those arms. 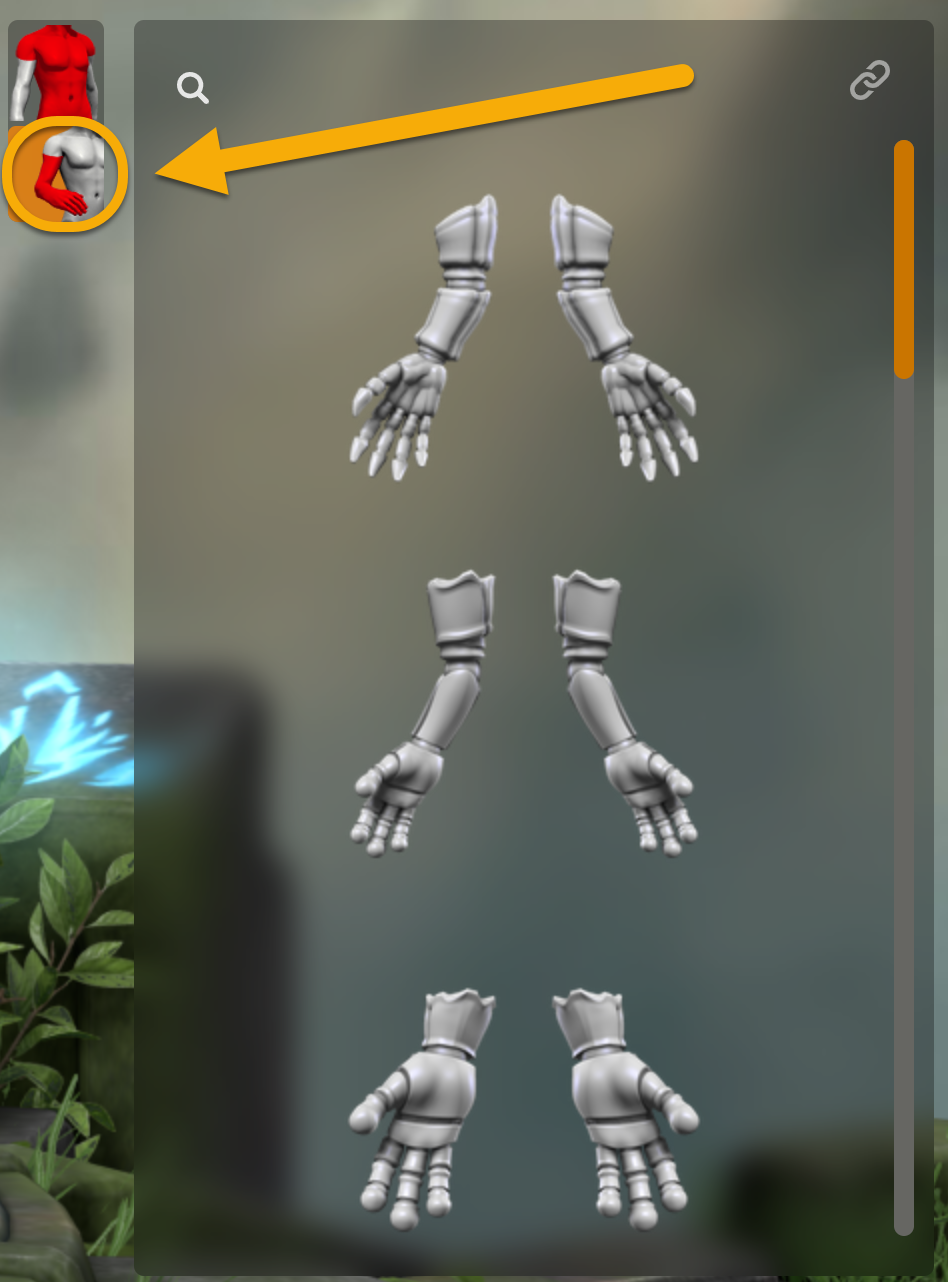 In the Gear → Hands menu, hand items are equippable. If your mini design has more than 2 arms, you can choose which arm set to equip with hand items by selecting the icons highlighting each hand set to the left of the selection area. 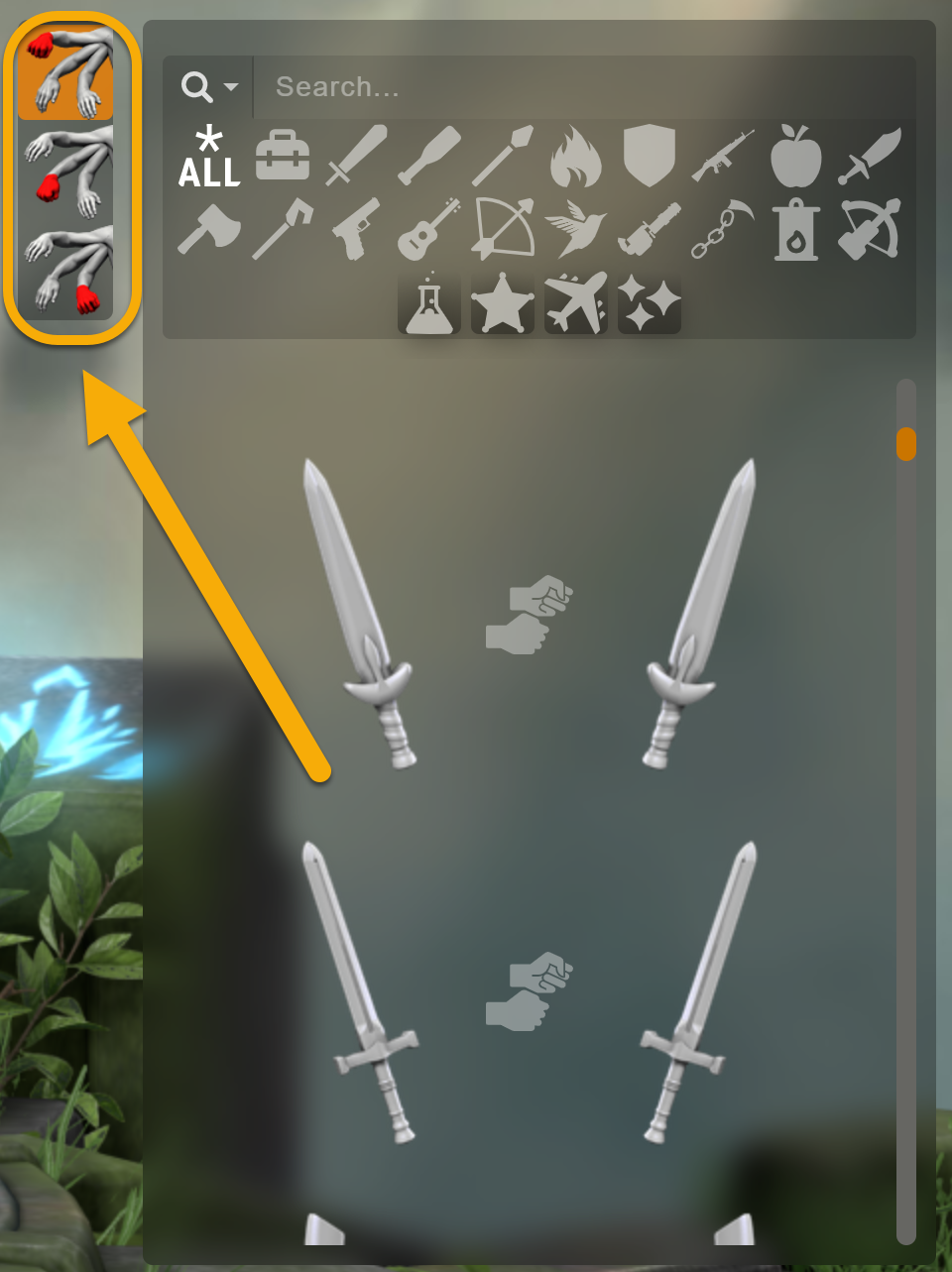 To get two items on your base, first, select the first item in the Base → Items menu. Once you’ve selected an item, a Base → Items B menu will appear. You can then select your second item from this new menu.

To fill in your base so that it’s completely solid instead of hollow, first navigate to the Base → Label menu, and then select the solid base icon. 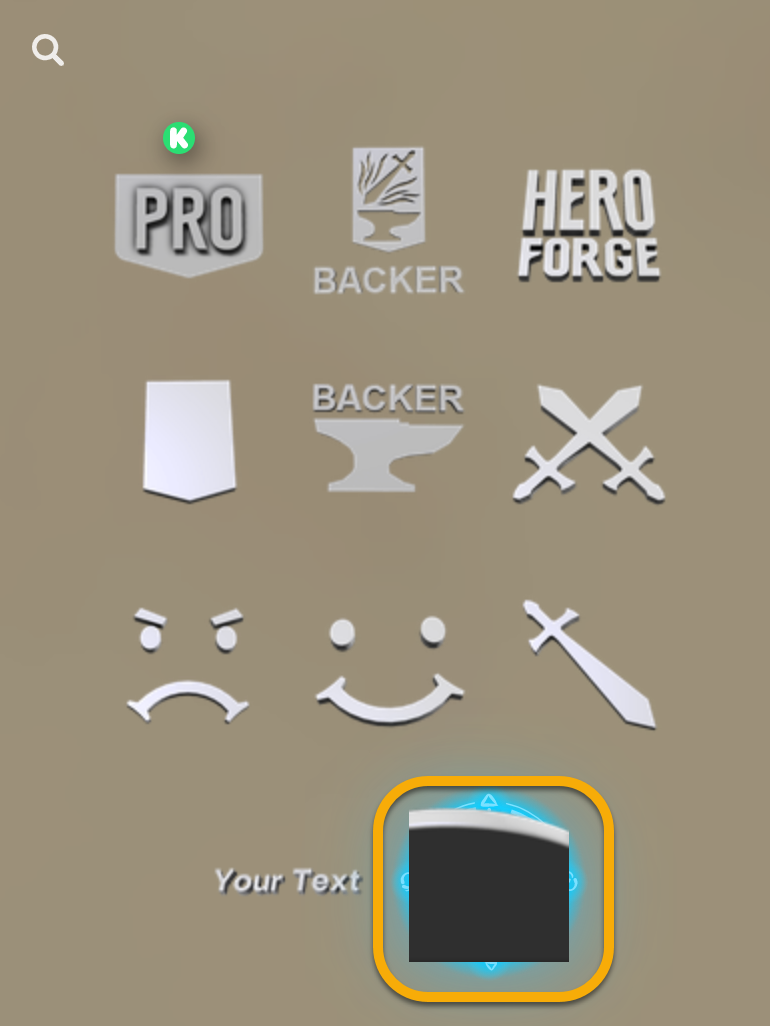 To add custom text to the bottom of your base, first navigate to the Base → Label menu, and then select the Your Text icon. A text box will appear below the label options. Clicking on the text box will trigger a popup where you can enter your text. You may add up to three lines of text. Click “Accept” to verify your change and be taken back to the character creator. 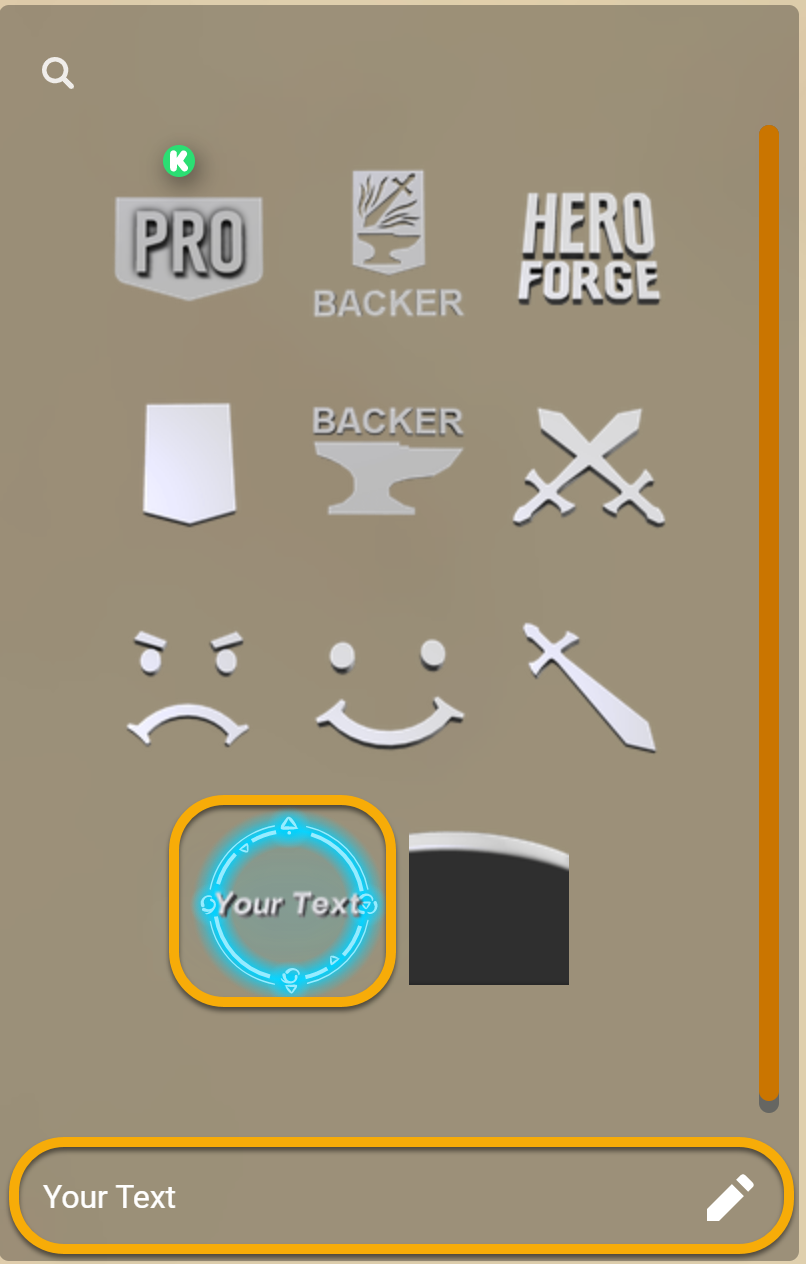 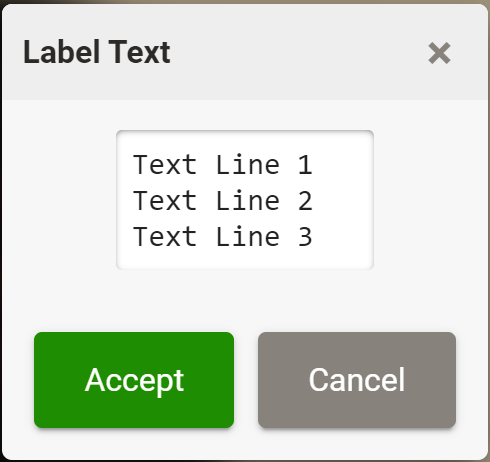 The underside of the base will be colored the same as the rest of the base. If you have equipped a base label in the Base → Label menu, however, you’ll be able to choose a color for the label.

To do so, go to the Color → Theme menu, then select the Settings icon on the top right of the selection area. This will bring up color options for different theme sections, including Underside Label.

You can view the underside of your base by returning to the Base → Label menu.

To add muzzle flash, first equip the gun you want in the Gear → Hands menu. Once a gun is equipped, a Muzzle Flash R and/or Muzzle Flash L tab will appear above the search bar of the selection area. Select this tab to choose from our muzzle flash selections. 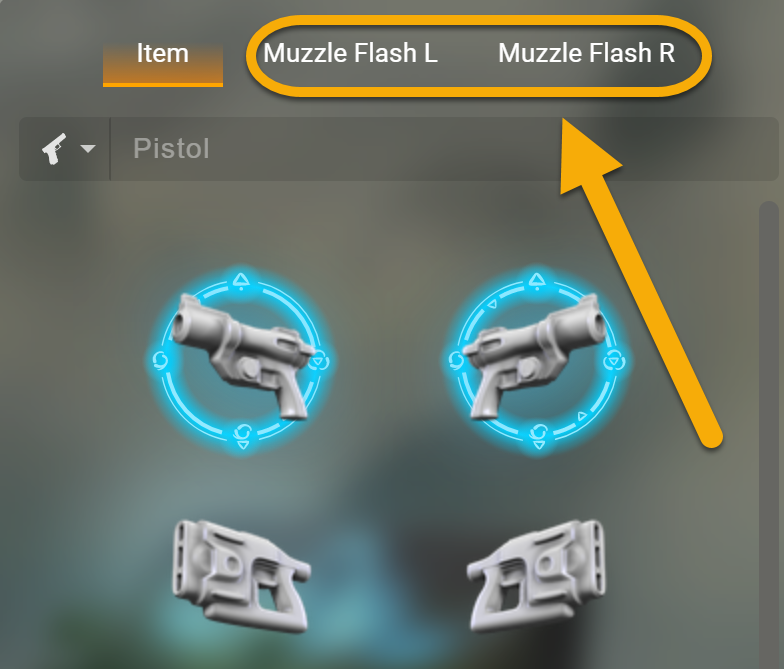 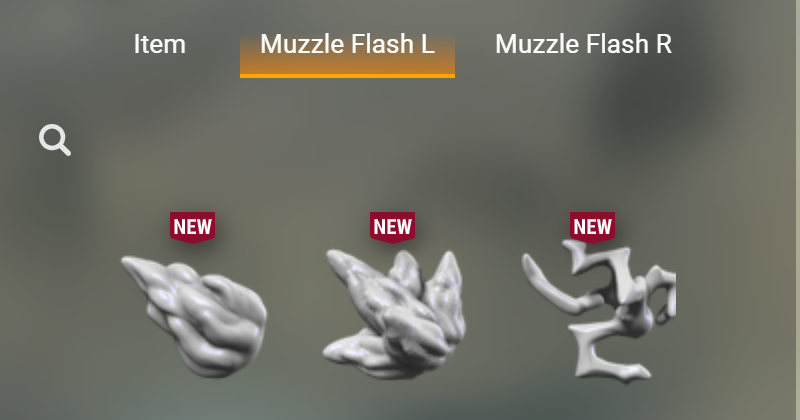 When you first equip a side item quiver, you’ll see that it’s empty. However, once a quiver is selected, you’ll see an Arrows R and/or Arrows L tab at the top of the item selection area. When you click on this tab, you’ll be able to select from a variety of arrows to add to your quiver. 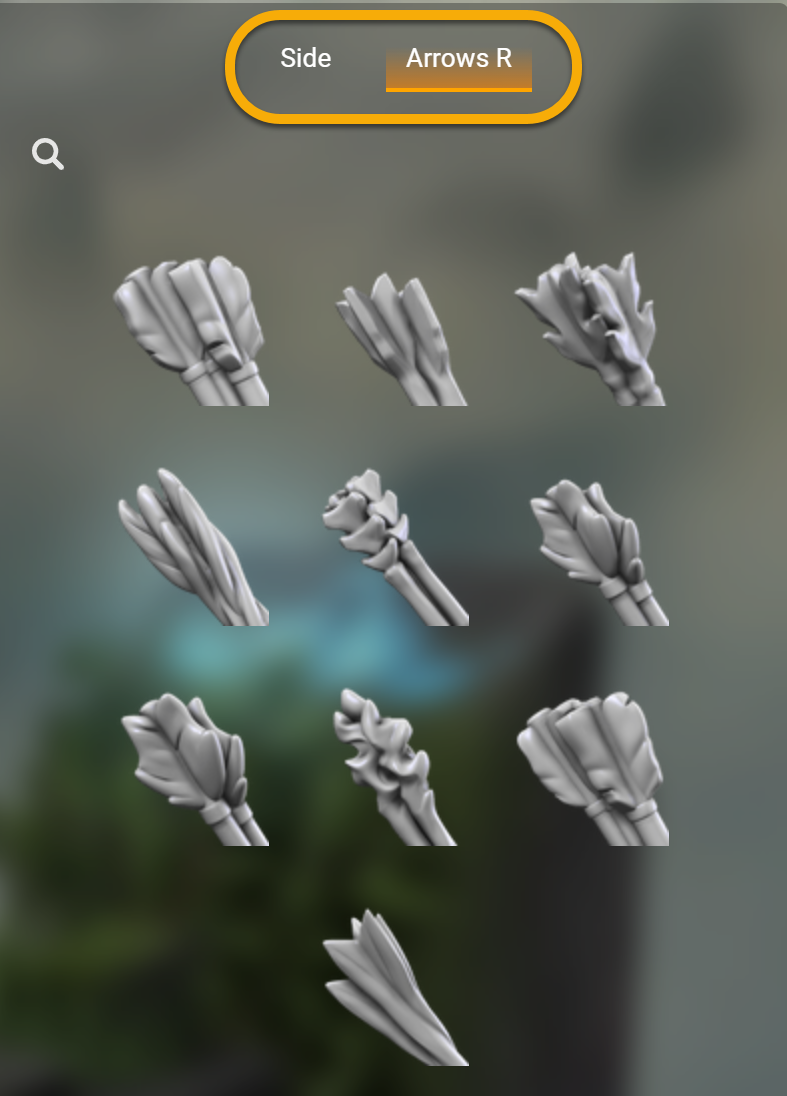 Back item quivers are full of arrows by default. These arrows can be changed or removed with the Arrows R and/or Arrows L tab at the top of the item selection area. When you click on this tab, you’ll be able to select from a variety of arrows to add to your quiver. 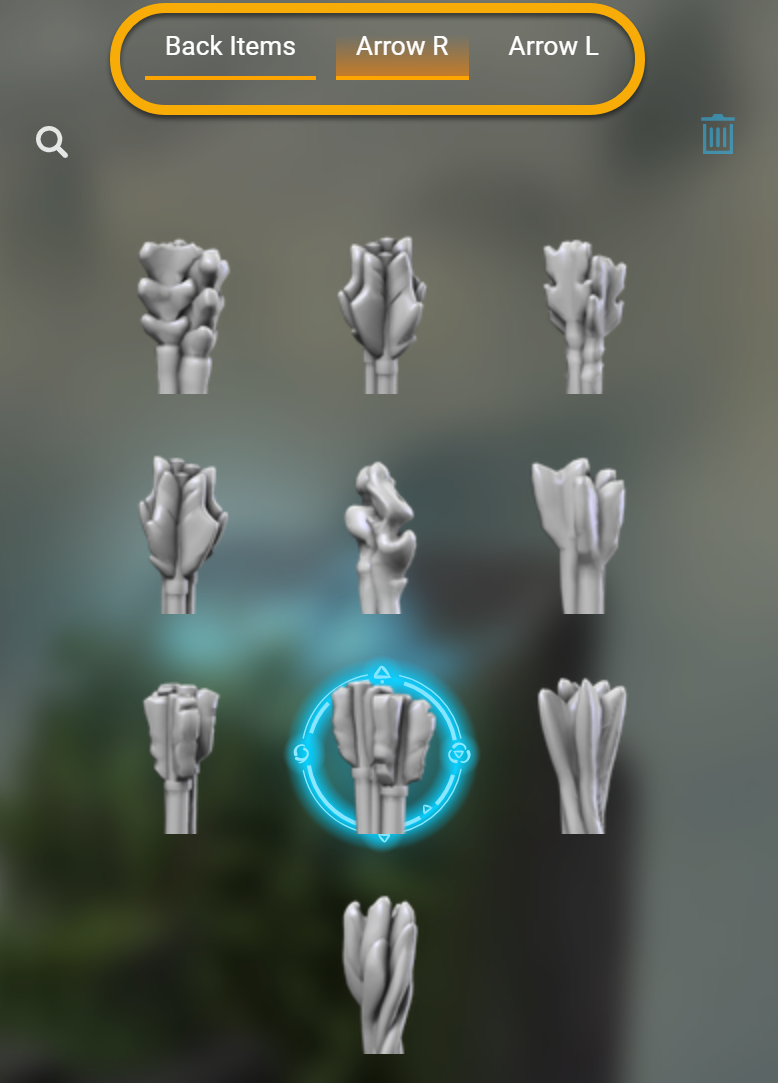 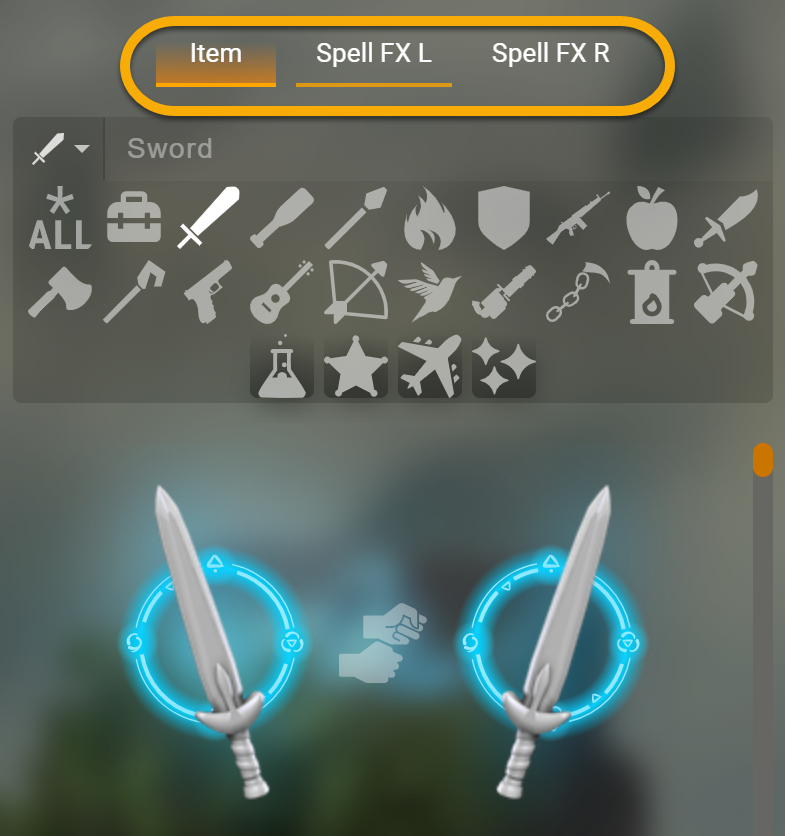 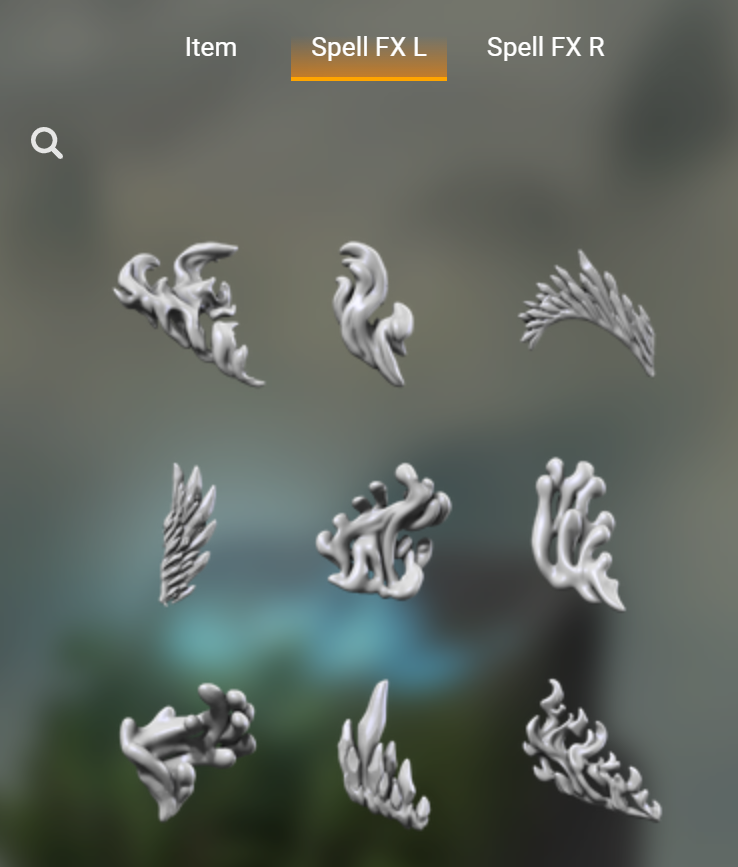 By default, ears are hidden when certain headwear is selected. To make ears visible, uncheck the “Hide Ears” checkbox that appears at the bottom of the Clothing → Head menu. 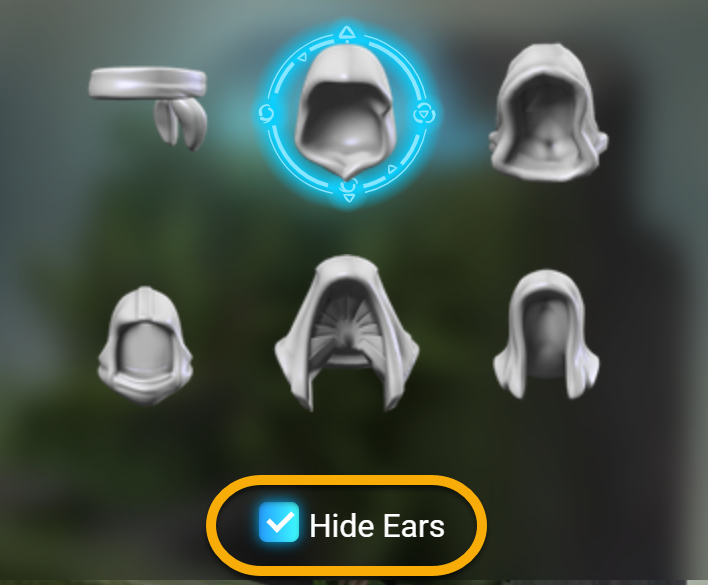 It is possible to have a mount with no rider. First, select the mount you’d like in the Mount menu. Then, check the “Mount Only” checkbox at the bottom of the mount selection area. 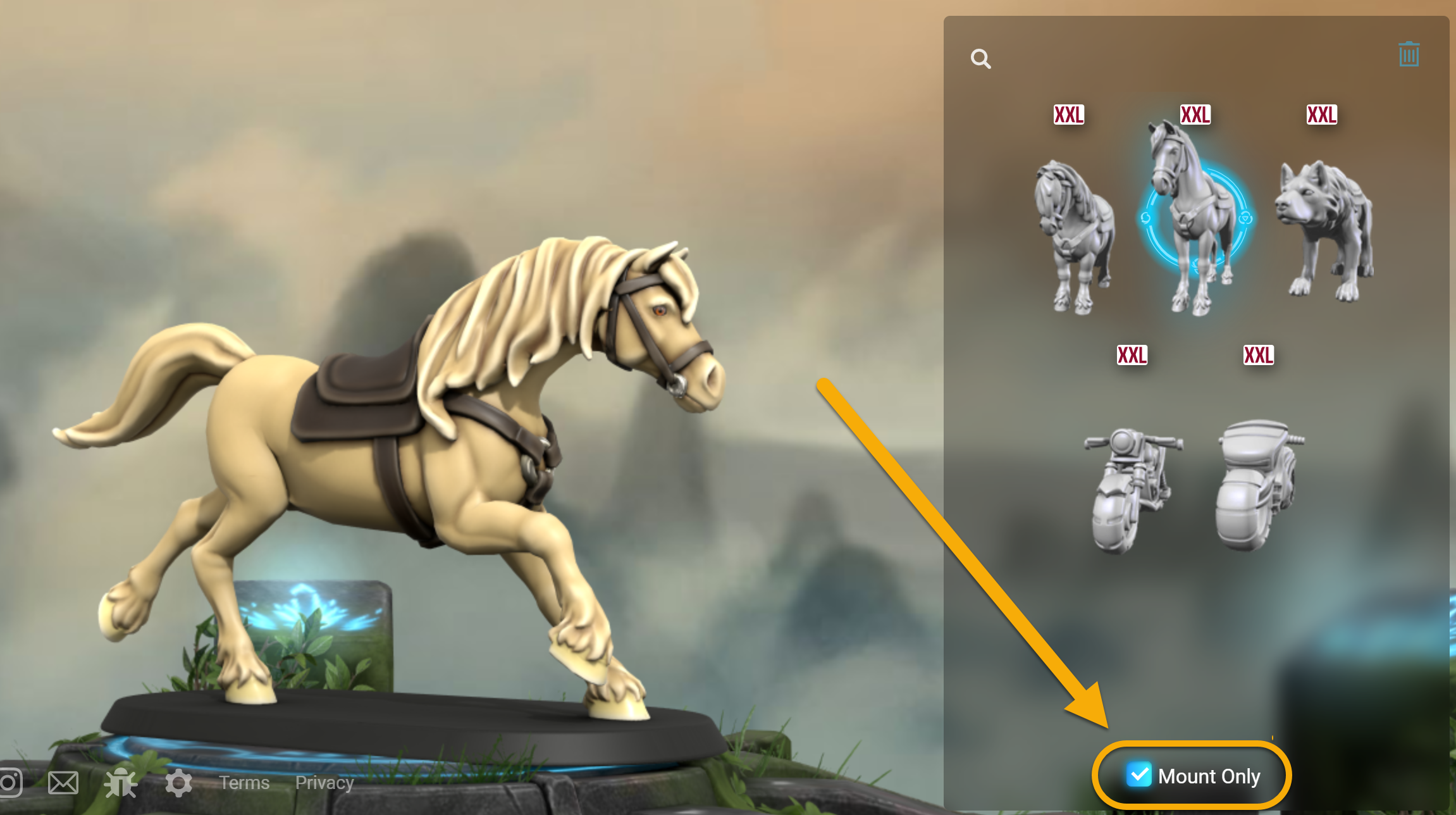 Click on the Stage menu. Within the Stage menu, click on Extra, and then Species. Once the species menu is open, you can add whatever species you want the second character to be to the base.

To add a second character from your existing saves, click the Import button instead of Species. Your saves will open, and you’ll select the character you want to import.

After adding the extra character, a new menu will appear above the mini. Click the dropdown icon to toggle between the Main and Extra characters. The character added to the base first will be considered the Main character.

The selected character will have a gold indicator hovering above it and its designation (Main or Extra) will appear on the menu above the mini. Whichever character is selected will receive any gear, pose, and color changes.

> and < can be used to toggle between the Main and Extra characters instead of the hovering menu.